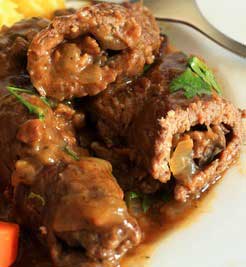 Black Pudding is a great traditional Northern delicacy and Beef olives have been appearing on menu since medieval times when they were known as aloes (the name Olive is probably a corruption of this, and virtually the first real olive recipe appeared in a Gervase Markham Book of 1660.) They were and are slices of beef steak wrapped around seasoned forcemeat (mutton and veal can you be used as well). Whole pieces of beef can also be braised for olives by simply filling with a stuffing. Anchovies were a regular seasoning in most forcemeats, having a strong influence on the finished flavour, but with this recipe the black pudding based stuffing creates enough of a taste of its own. The black pudding is roughly chopped and added to mince pork or chicken helped along with red wine these flavours work very well together.
The garnish of button onions and mushrooms also lifts all of the tastes and makes this dish a beef Olive Borguingon dish.

4×175g (6 oz) Slices of topside or rump of beef (smaller 100 g 4 ounces can also be used).
half a bottle of red wine or a whole bottle can be used for stronger taste.
600mls / 1 pint Veal or beef jus
1 tablespoon plain flour
1 tablespoon beef dripping or cooking oil
sprig of time
1 Bay leaf
salt and pepper

For the Black Pudding stuffing

Place the beef slices between two sheets of cling film then battered out with a rolling pin to 5 mm thickness.
To make the stuffing, melt butter in a saucepan and once bubbling add the chopped onion and crushed garlic. Cook without colouring for a few minutes once tender remove from the heat and allow to cool.
Season the minced pork or chicken with salt and pepper. Beat in the egg. The cooked onion can now also be added. Add the black pudding, mixing it in well to break down the texture slightly, spreading the flavour throughout the forcemeat.
Check the seasoning, the stuffing can now be spread between the four steak slices, roll up and hold together with two cocktail sticks per olive or simply tie with string. These are best left to firm and set for at least 30 minutes, refrigerated.
While the olives are setting the button onions can be blanched in boiling water for 2 to 3 minutes to release the rawness. Drain and leave to cool naturally.
Bring the red wine to the boil in a suitable sauce or braising pan. Boil and reduce by half before adding the jus or water and stock granules if using.
This dish can be left to simmer on top of the stove on a low heat allowing the liquor to barely simmer or braised in the oven at 160°C/325°F/gas mark 3. Heat a frying-pan with the beef dripping or cooking oil. Sear the beef olives until golden brown.Place in a braising dish with red wine sauce, thyme and Bay leaf. If using water to make the sauce, then roll each olive in through the flour before pan frying.
Season the stuffed olives and sear colouring on all sides in the hot pan. Once coloured place in the red wine, gravy pot with the thyme and Bay leaf.
Now bring to a very gentle simmer make sure the olives are just covered in red wine sauce if not then top up with water. Cover with a lid and cook on the hob or in the oven for 1½ to 2 hours skimming from the time to time. The beef olives will be very tender.
Towards the end of the cooking time for the olives, melt another knob of butter in a large frying pan. Once bubbling, add the button onions. Cook on a medium heat and fry, allowing them to colour to golden brown and become tender. This will take 8-10 minutes. After 6-7 minutes, add the mushrooms, season and continue to cook and colour until both garnishes are ready. Keep to one side.
Remove the olives from the sauce and keep warm. Bring the sauce to a simmer and skim off any impurities. Strain through a sieve.
If the flour and water were used the sauce will probably need to be reduced by a third to give it a good consistency.
The most important thing is to make sure the flavour does not become over-strong. Once at the right stage if too thin then thicken with a tablespoon of cornflour mixed with red wine.
It’s not important always to have a thick heavy sauce; just a good tasty cooking liquor will be fine. Remove the cocktail sticks or string from the olives and divide between four plates. Pour the sauce back over, adding the button onions and mushrooms. Sprinkle each plate with chopped parsley if using.
These beef olives will eat very well with a bowl of mashed potato.